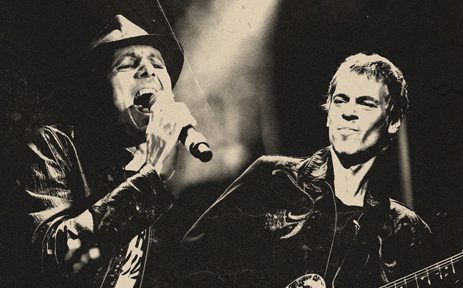 In 2018 Alejo Stivel (vocals) and Ariel Rot (guitar / vocals) are saying farewell to their trajectory as Tequila with the “Adiós Tequila Tour”. They will play live once again generational anthems such as Dime que me quieres, Me vuelvo loco, Quiero Besarte, Salta!!! Or Rock en la plaza del pueblo, among others.

Tequila reached a peak success in their career between 1976 and 1982, becoming the soundtrack of an awakening Spain to cultural, social and political vital changes.

Their notorious trajectory left four albums full of timeless anthems which have remained alive through the years. In 2008 some of them were included in “Vuelve Tequila”, a compilation CD-DVD and a reunion tour. A fresh, lively and easygoing rock and roll, influenced by Chuck Berry or The Rolling Stones, as the band members admit.

On March 15th 2018, Tequila was honored with the Cadena Dial Award to their whole career, their “trajectory and contribution to Rock and Roll in Spanish”. With the “Adios Tequila Tour” Tequila, one of the greatest legendary rock bands in Spanish will bring their powerful live show to the main venues of our country.

Jaime Buenaventura is a young pop and rock songwriter in Spanish. With catchy and daring lyrics, he appears as a transgressive artist influenced by many, from Pete Doherty to Ivan Ferrerio or Andres Calamaro, among others.

Jaime Buenaventura is currently working on his first studio album and preparing a new live show with his band, which will be presented on December 22nd at Jamboree (Barcelona), within the “San Miguel Music Explorers on Tour”