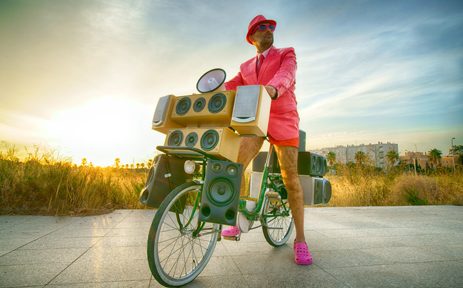 Joan Miquel Oliver presents “Elektra”, third album of a trilogy that he and the painter Albert Pinya opened in 2015 with “Pegasus, and followed with “Atlantis” (2017).

The main difference between “Elektra” and its predecessors is the incorporation to the studio of two of Oliver’s live shows musicians from 2015 to 2018. The electronic material recorded solo becomes on stage an electronic sound where improvisation acquires a special relevance after 150 concerts.

Jaume Manresa (keyboards) and Xarli Oliver (drums) are implied in this new record not only as instrumentalists, but as music producers also. The production is based on some rehearsal sessions recorded at Oliver’s studio where each of them provides their music without any pre-constructed idea. The outcome relies on an artisan and organic acoustic which will prevail after the definite recording (special attention to “Hipotèrmia”, “Bucle Infinit” o “Sa Música”).