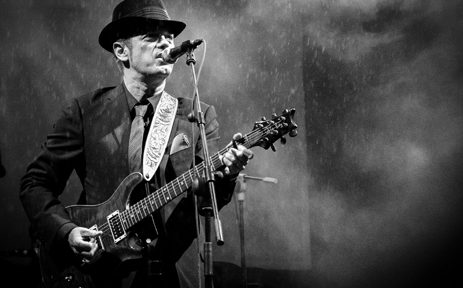 JUAN PERRO with lead-singer Santiago Auserón, assemble the exceptional voices of a group of music creators united by a mutual complicity, who take the mixture of Afro-American and Latin traditions to the ground of sound experimentation. The poetic emotion, the mood spread on the creation of each song and the depth of their performing, rely as main features of this top-notch band.

Their repertoire range from all-times songs by Santiago Auseron, to other more recent compositions recorded, at first, with acoustic guitar and vocals for the album “El viaje” (La Huella Sonora 2016), to be now fully dressed up for a promising register.

“I don’t know if I’ve been walking my dog-faced minstrel for the last 25 years or it’s been him who’s taken the troubadour away, leaping through harbors and borders… The thing is that I’ve come together with the best soloists to share a path that comes sewed with musical discoveries”.